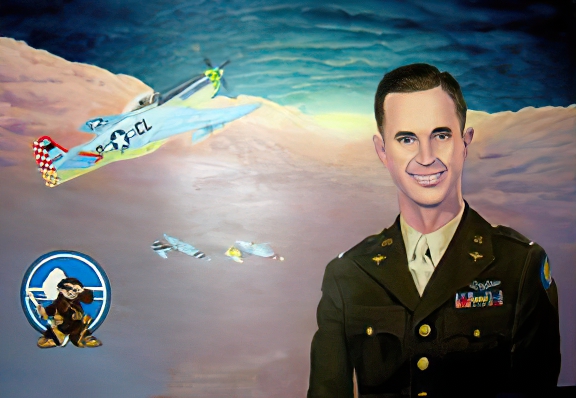 DEDICATED TO A FALLEN HERO
In the winter of 1945, as the air war raged over France, a lone P-51D Mustang, returning from a reconnaissance mission, was lost near the village of Longueville France. The P-51D had developed an unknown mechanical problem causing the loss of the pilot, Lieutenant William Patton, and his aircraft.
For 56 years, Lieutenant Patton and his plane were lost to history. On January 15 2001 Lieutenant Patton’s aircraft was accidentally discovered submerged in a bog near the village of Longueville. The remains of the aircraft were removed from the bog and displayed in the museum of Fort Leveau in France. Due to the unique properties of this bog, Lieutenant Patton and his aircraft were well preserved, allowing the Lieutenant to finally be properly interred in the Springfield National Cemetery.

By the end of the war, there were over 79,000 fallen heroes declared missing in action. Please visit our museum and see the recovered parts of this aircraft along with other memorabilia.

This web page is dedicated to the family of William Wyatt Patton.